Modal analysis is, along with linear static analysis, one of the 2 most common types of FE analysis. If you don’t know about those, you’ll have to review your fea basics. That’s what we’ll do here!

In this short article, I’ll talk about:

The difference between static and dynamic analysis

Static analysis means that we are making the assumption that the system we are simulating doesn’t depend on time.

Whatever the time period we observe the system, it will remain always the same.

It implies of course that the loads and boundary conditions don’t depend on time either.

In reality, this is a hypothesis, because every load has to be applied from a time t=0 sec

To take that in account, in static analysis, we just say that the load is applied « infinitely slowly » so there is no discontinuity during the load application.

There are cases in which the loading itself (or the system) is dynamic and thus we have to perform a dynamic analysis.

Here is an illustration (pardon my poor drawing skills…):

Dynamic Loadings can have various temporal distributions and it definitely has an impact on the system.

I think that this is generally understood, but a short reminder is always good.

Cyclic loads have a certain frequency, period and intensity.

Cyclic loadings are transient loads. If you want to understand more about transient and steady-state and really understand the difference, I wrote another article about the topic in the past here.

The response of mechanical systems to cyclic loadings

To explain things simply, you can say that the response of a system to a dynamic loading can be like the following:

In all cases, we want to avoid the 3rd type of response, because it means that the system will break

Consider a kid on a swing.

The swing is the mechanical system and the kid provides a forced excitation input.

If the kid’s excitation load has a frequency which becomes close to the swing’s natural frequency, the swing goes up and up and the oscillations increase.

This phenomenon is called « resonance ».

(You can imagine that if the kid continues to push, he will be ejected—> that’s dangerous ;-) )

The same can happen for any mechanical system that oscillates or vibrates.

Watch this video if you don’t believe me:

When does it happen?

It happens when the system enters in « resonance » with the frequency of the input loading.

Now that you know that, you understand that it is absolutely critical to be able to calculate the resonance frequency of a system

So what is modal analysis??

To explain it simply, modal analysis is a simple way to calculate the natural frequencies of your system so you know which frequencies can be destructive and dangerous for it.

Here a video I just created to show you how to perform simple modal analysis:

Why there is no load in a modal analysis?

That’s a question I often get about fea basics

Modal analysis calculates the natural frequencies of the system alone.

Modal is the simplest analysis and the only thing it does is telling you what are the “resonance frequencies” of your geometry. It isn’t related to a loading at this stage, only to the geometry. Resonance frequencies change due to the shape of your model and the way it is constrained only.

Because generally, once you noted the dangerous natural frequencies, you actually want to know:

“If I excite my model at this dangerous frequency, how much deformation will I really get?”

What is the input I need to provide for the EIGL Card?

The EIGRL Card is just a way to enter the parameters for the modal analysis, which are in general:

1- The initial frequency you want to start searching (V1)

2- The last frequency you want to stop searching (V2)

If you are a beginner in FEA simulation, read this article. 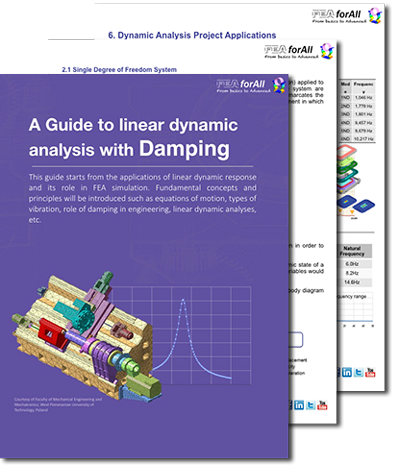 7 wrong beliefs about meshing that you may have

Do you remember that few hundred years ago, people believed that the earth was squared? We all have wrong beliefs...