As you might be required at some time or another to run your FEA “into the cloud”… better understand what is means ;-) 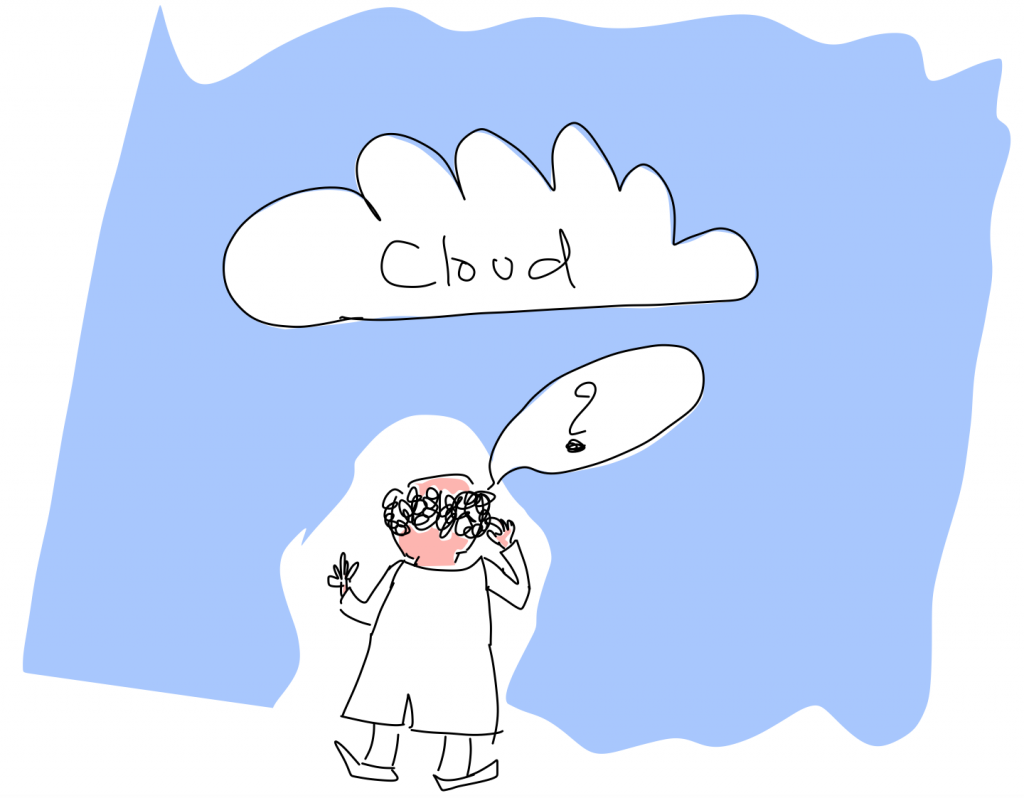 As usual, let’s break down what it means and make everything simple to understand

(Simplicity is the root of understanding)

Why would I ever put my FEA in the cloud ?

One of the major reason FEA can work well in the cloud is because Real World FEA problems solved by an FEA solver require a lot of computational resources (like Processor cores, RAM & Storage)

So the FEA solver is the main part of the FEA system that we would like to have in the cloud.

Now you understand that there are mainly 2-3 things you need to understand here:

Let’s tackle those topics one by one

What is an FEA solver?

In engineering and science, everything (at the raw level) starts with equations and physics (because that’s the way we engineers describe nature ;-) )

That’s why we observe fire (the physics) and we create a mathematical description of what happens with equations so we can “explain” the behavior later on. 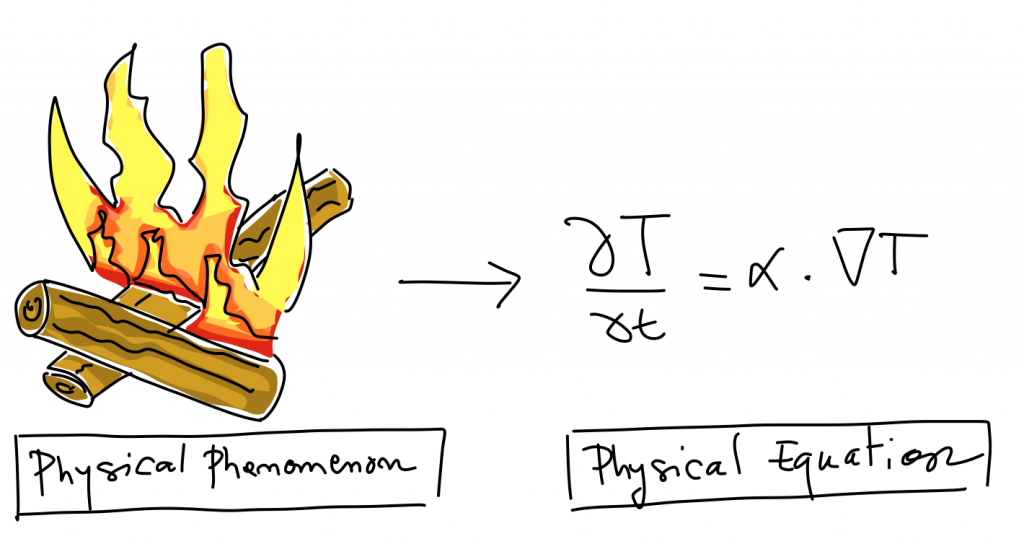 So, okay, fine… you have equations…

…But what does it has to do with the FEA solver?

Why can’t we just use the analytical solution of those equations?

Because most equations are too complex to be solved analytically and exactly, so we need to find an approximate solution (and bare the error).

So… The way to solve an equation numerically is to use an algorithm which can do it.

Simple to say… difficult to do!

And very computationally intensive too

The FEA solver requires your computer to have a very good processor with a lot of cores (providing that it supports multicore), a lot of RAM (to save the large matrixes in memory while solving the equations) and a lot of hard drive space (to save results and do out-of-core calculation).

If you want an example of algorithm used, you can think about the Newton-Raphson method for example is a very useful algorithm in FEA analysis for solving non-linear step-by-step solutions.

So… The solver is basically a compiled application which runs on a computer (1), takes an input (2), execute an algorithm (3) and gives you back output(4). 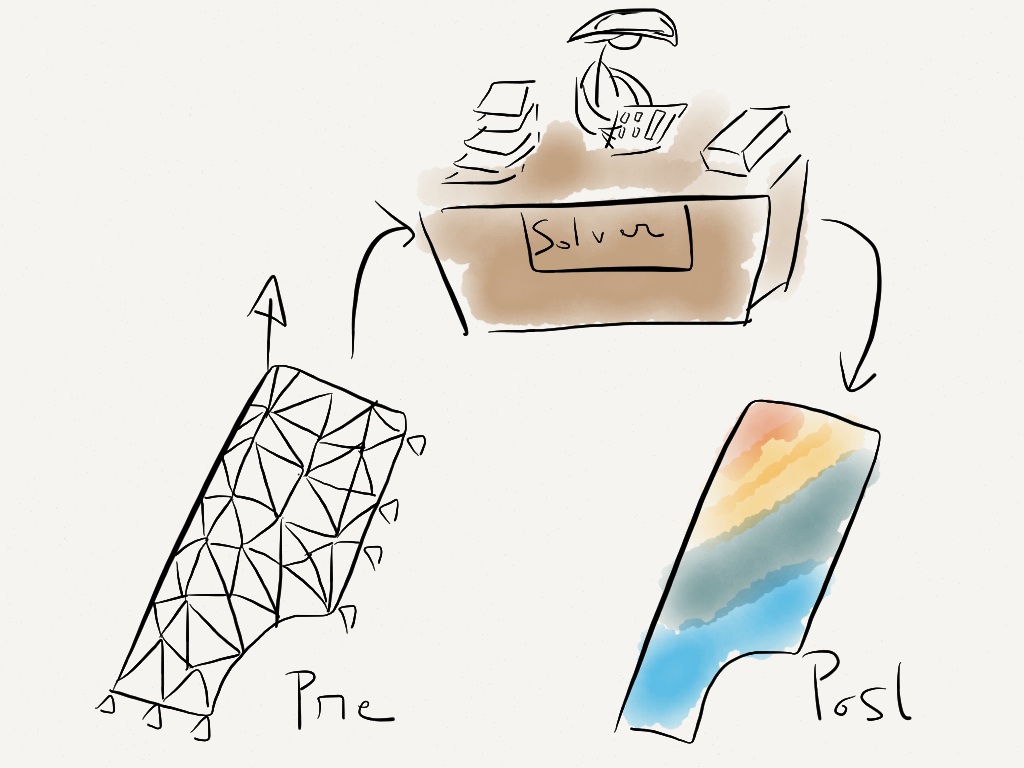 When I say “Runs on a computer”, I didn’t precise where the computer has to be located… and that makes all the difference with the cloud.

So, Traditionally, the solver is just a piece of your FEA software and is run on your computer as a normal program.

(If you need more details about how a solver works, I have an article about it here)

Now, before I describe to you what is the cloud, you need to understand the limitations of running a solver on a local machine… that has to do of course with the computational resources I mentioned before.

Bare with me, you will see, everything will become clear for you after you read the next parts of the article

What are the main limitations of running a solver application on my own computer?

When I install any traditional FEA software on my local machine, I basically get 3 kinds of software installed:

So, as soon as the model is created and ready to be solved, that’s when you need to send it to the solver which will compute and solve numerically the physical equations corresponding to your model and then generate the results you asked for.

That’s when you have to wait a loooooong time generally (Depending on the model) ;-) 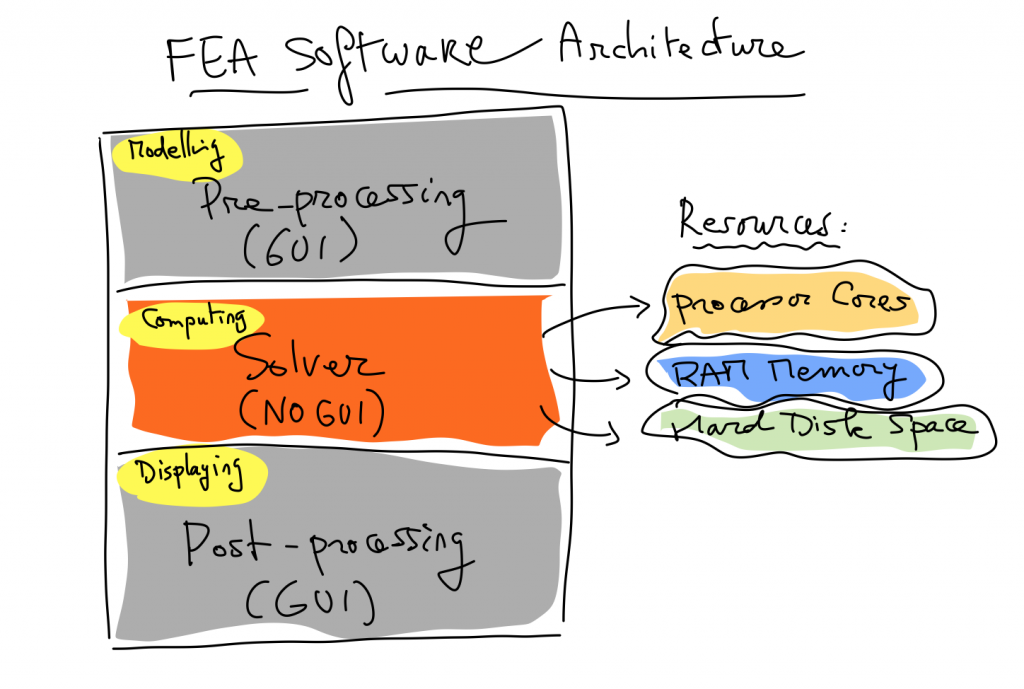 So you already experience the first limitation of using your own computer to run the algorithms…The calculation takes a lot of time and also CPU power!

Some brilliant engineers had the idea to accelerate all that by using something « new »… a cloud server.

What is the cloud?

The principle of the cloud computing is the following…

Instead of having a physical computer in front of you, you have a computer which is located remotely somewhere you will never know. 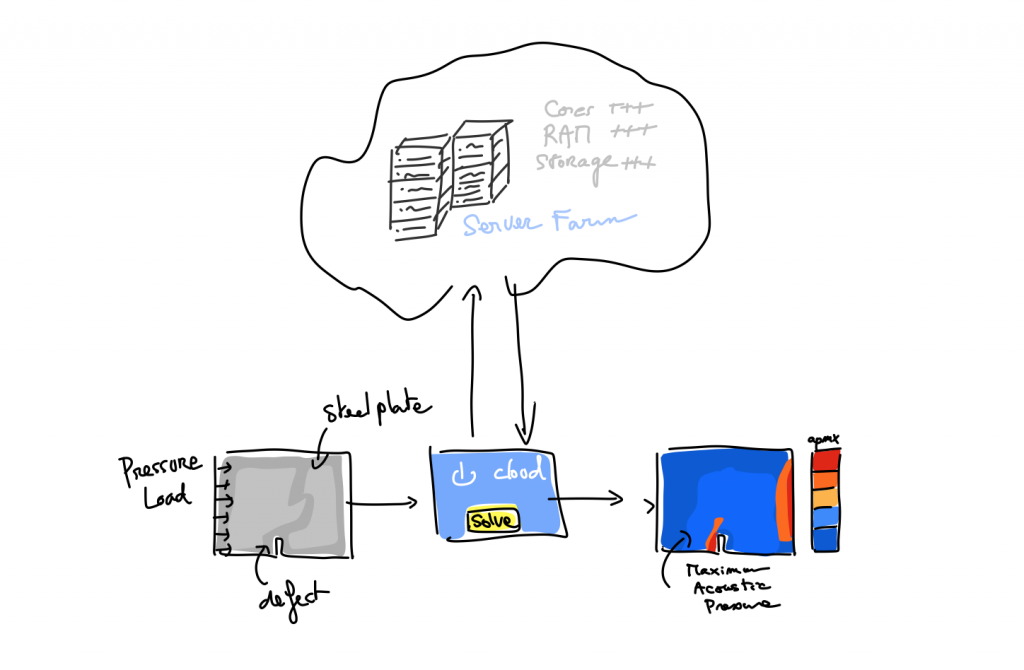 So because the guys who invented it didn’t want to bother the users with giving a real location of that “remote computer” (and users do not really care either generally), they decided to give it a clever name and call al remote locations the cloud.

It answers the simple question:

Where is the computer I am sending my data? In the cloud!

So… it’s basically called a cloud server because you don’t necessarily know the location of your server.

It may be located in US, or in Singapore or anywhere else…and sometimes your data is even distributed between several machines…but the location in itself is not very relevant (as long as it is connected to the internet obviously)

So putting your “FEA in the cloud” means simply that instead of installing your FEA software on your computer, you would install it inside a remote server computer “in the cloud”.

What happens when I compute an FEA model on the cloud?

1- You basically send the input data file to a remote server,

3- You get the output data back on your computer 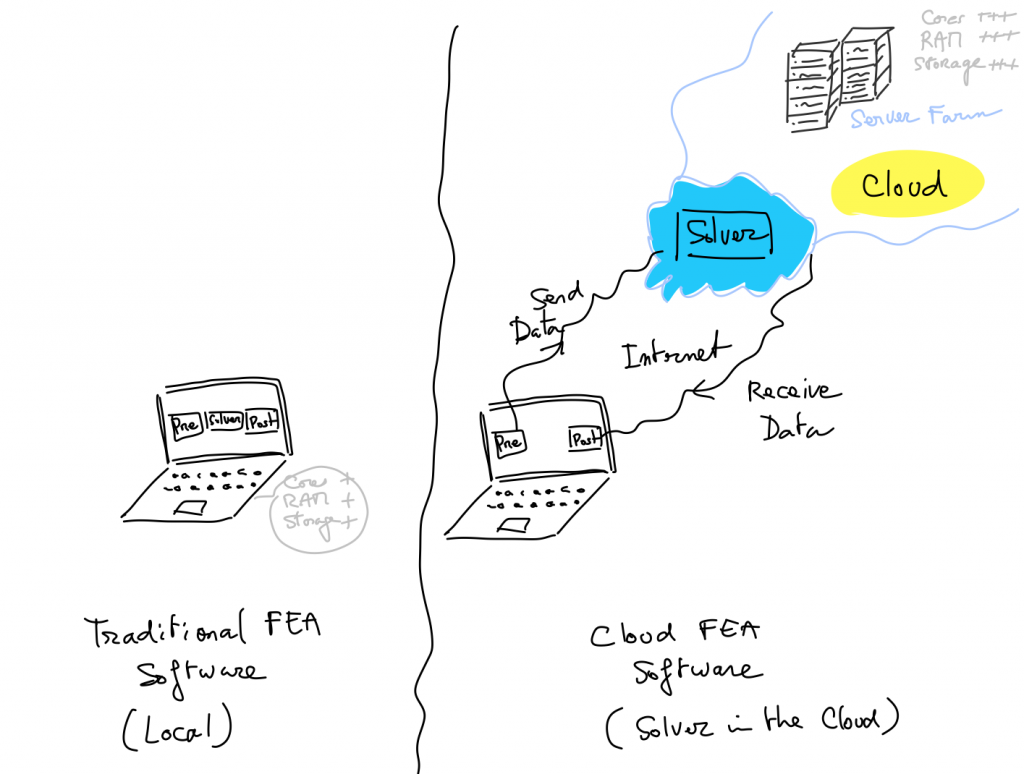 Note that this is not a sooo new concept…

In fact, FEA started from the very beginning by using punch card machines system to create “input decks”, that would then be sent to a remote location where a HUGE mainframe was doing the calculations and print results on paper sheets 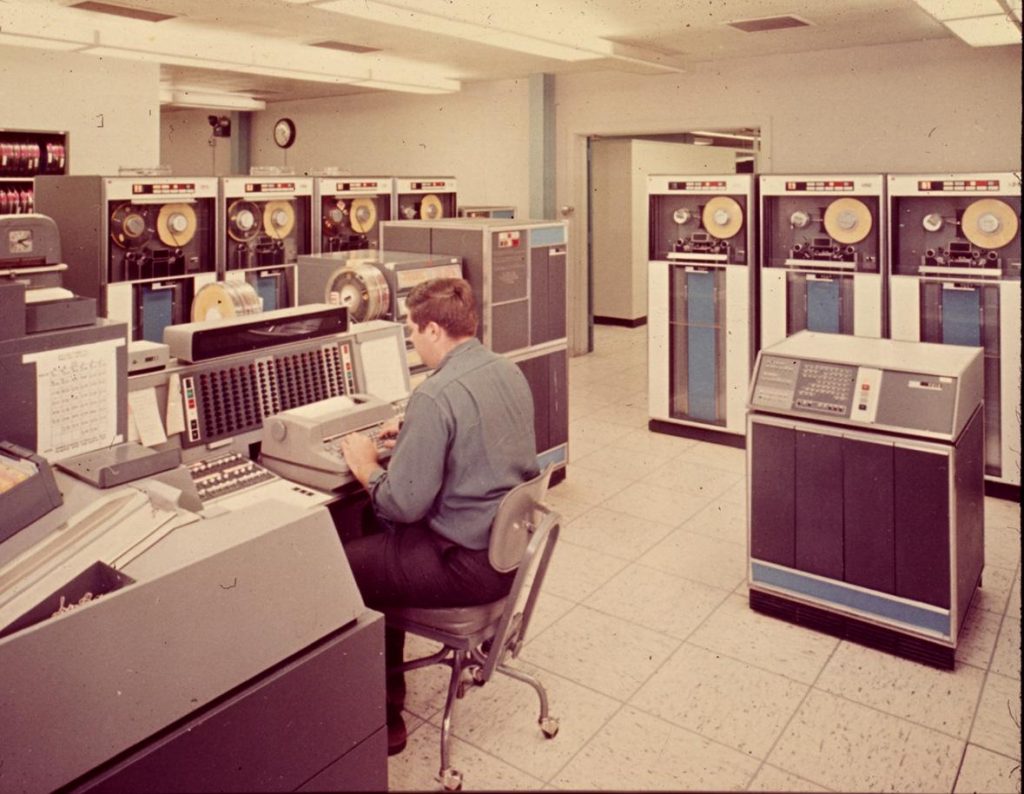 It’s interesting to see how history can run in circles ;-)

Otherwise, how could we start designing the star destroyers you see in star wars and start to colonise space?? Right? ;-)

Can I have EVERYTHING in the cloud? (not just the solver)

I described mainly the case where only the solver is in the cloud and everything else is on your local computer.

In my humble opinion, that’s the best way to do it…

I tried a few of the current software who boast to have an ‘easy to use’ browser interface (I won’t give up names), but frankly, I was highly disappointed by the time it takes to load different web pages and my model crashed so many times that I had to give up after 54 minutes of pure despair

(I am not exagerating… okay, just slightly, let’s say I was just mildly despaired)

I think that a local pre/post software is the best to solve latency issues and make sure my model building experience is optimal.

Why would you put everything in a browser if it is to make the experience worse… seriously?

The pre/post processing graphical interface may be installed on your local computer while your solver is in the cloud.

In this way, every time you want to computer something, you have to send the data to the cloud server, wait for it to compute and get some result and receive those results back to your computer.

Important Note: As using FEA in the cloud requires to send your data to a remote server, make sure that the software you use protects your data by encrypting them and uses a 3rd party secure cloud implementation such as Amazon AWS. FEA simulation data can be very sensitive and I would be very careful to send my FEA data to a company which would store those data in their own servers.

Why has a cloud server more computational power than your computer?

Your computer is a physical hardware, so whatever number of cores you have on your processor, this ain’t gonna change…

The number of cores for example may be 4, 8, 16, 32 but it rarely goes beyond that
(Except if you are the happy owner of a supercomputer… in that case, send me a photo please, I’ll feature you on this article ;-) )

A cloud server is different as it is generally a « virtual » machine.

This is why it is said to be « scalable » 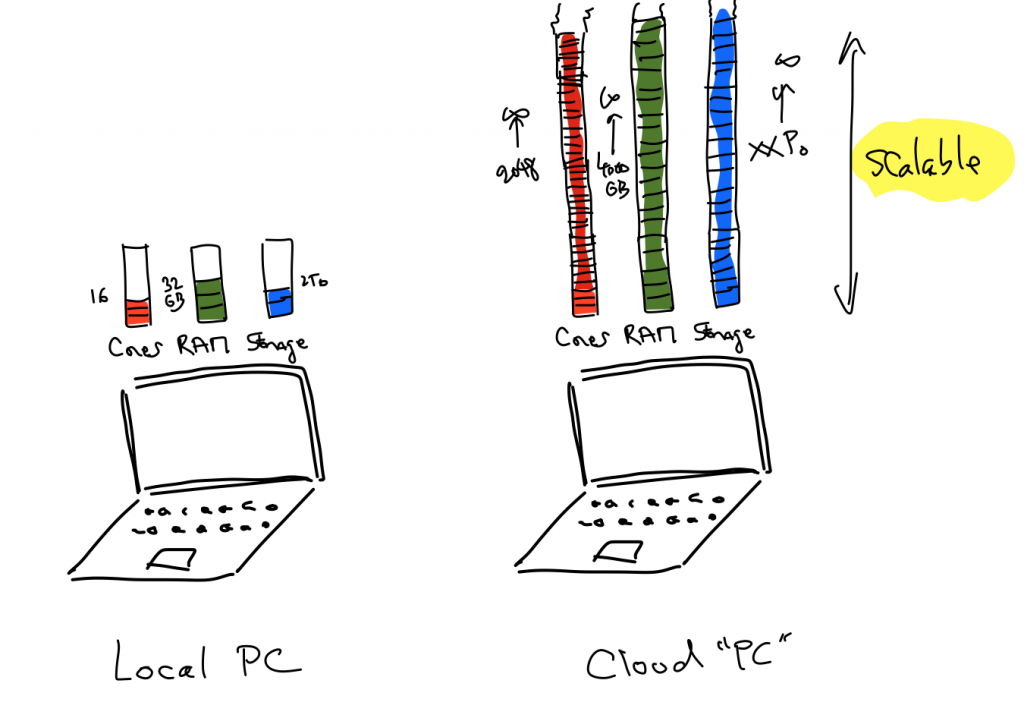 With a normal computer, it would take years for you to calculate this model (if you can do it at all)

But with a cloud server, you can expand the number of cores and calculate much faster ;-)

How can you use FEA in the cloud?

First, you are very geeky (like me) and you can setup your own cloud server, install an open-source solver in it and create an API that will send and receive data that you can process using python or mathlab

(I would LOVE to show you how to do all that BTW… maybe in a future blog post! Make sure you are in the email list to be notified when I do, because this would be HUGE :-) )

Second (more practical) solution is to use a software which already does all that for you!

There are several solutions on the market right now

For example, you can think about Onscale which provides you for free with a pre/post software and then gives you 10 Core/Hours per month to use their solver on the cloud (10 CH are actually a lot, you can run more than 1000 small models with that)

The advantages I see in Onscale are:

It is true that now Onscale is much more focused on solving dynamic time-domain problems for electronic and acoustic industry… but they have real Multiphysics solvers too and more will come soon ;-)

Tutorial: 2D Wave propagation in a steel plate with a defect with “FEA in the cloud” software Onscale

I talked a lot about the cloud in this article, but what does it actually LOOK LIKE to run something on the cloud?

Nothing is ever useful without a quick practical example!

Here’s a quick 3 steps tutorial that will show you how FEA in the cloud work for a 2D acoustic wave problem:

1- Build the steel plate with a defect model

3- Check the results in the post-process

Wants to know more about Acoustic Waves and how they propagate?

What is a sound wave & How does it propagate?

That’s all for today!

If this is useful for you, please leave a comment and let me know

Thank you so much for reading!

PS: What is your personal view about the cloud? I would love to know what you think! Post a comment and let me know, I read all of them

How to measure voltage in OnScale Double Tonpilz Acoustic Simulation

A lot of people ask me about how to extract the voltage in OnScale, so I decided to make a...