That FEA problem used to drive me mad

It happened to me a countless number of times.

I had just finished to set up my FEA model and run the analysis and I knew more or less what range of stresses I wanted to find.

I was waiting for the results to confirm that…

BUT…As you know there is always a factor between le results you expect and what you actually get… that’s normal in FEA.

I was looking at the maximum Von Mises Stress and I realized the average values inside the model were more or less OK, but I was just getting a small red point that was changing everything.

Inside this red area, the “normal” von mises stresses were 3 or 4 times the expected value and it clearly indicated that there was a big problem in my model…

So what did I do?

Of course, I started to search on the Internet! :)

And I found I was not alone to have such a problem… in fact, this problem was very common.

It was a singularity.

This word sounds like coming right from Star Trek…

Do you know what is a singularity?

You see the image below?

Well…a singularity is basically the same… but inside your FE model! 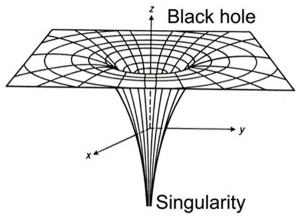 Now I knew what it was…a singularity… but I still knew nothing.

“Even if you know the name of a bird in hundred languages, you still know nothing about the bird.”

So I decided to learn more about singularities and by what they were caused.

But, maybe before I explain that, you are wondering why singularities are such a pain in your model??

After all…I didn’t discuss that

Why is a single singularity in your model such a pain?

Well, singularities are causing many problems, but the major ones are:

– They cause an accuracy problem inside your model near the singularity.

– They cause a problem of visualization of your results by extending the range of the color inside your legend.

Those 2 problems are very painful…and that’s why I was wondering what ultimately causes singularities.

What causes a singularity

At first, I searched the answer on the Internet, but I couldn’t find it.

(I always thought that all the answers were available on the Internet for free, but that’s really not true)

Finally, I had to ask someone more expert than me about this topic to understand finally what was the major cause of singularities.

And it was …boundary conditions!

I didn’t want to believe it at first, but when I modified a bit the boundary conditions of my model, I discovered that the singularity vanished immediately.

Who knew that boundary conditions had such an impact…

Since then, I made a lot and a lot of progress (this situation I described happened 6 years ago when I just started to use FEA seriously)

I understood that there are a lot of ways to tackle singularity problems and also to set up boundary conditions so you will never get singularities…but that really took a lot of time to understand and a lot of efforts.

Maybe I’ll do some short course about it to explain all that in real details to you. That will save you a lot of time for sure.

Would you like to learn more about this topic?

[Tutorial 1] How to Install OpenFoam on Linux and Windows

The dangers of bad accuracy in FEA results

Have you realized how everyone is always talking about FEA as the ultimate weapon to solve any engineering problem? In...