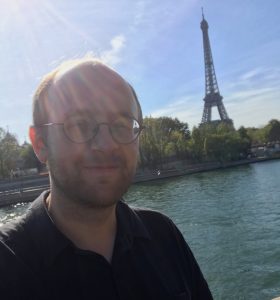 I decided to write about it now that I have a bit more understanding of the dynamic phenomenons.

Maybe you had the same questions after all, who know…

When I was a kid, I was always thinking about this simple problem:

If I am on the roof of a moving train like I see in the movies and I jump on place, will the train continue to go behind my feet’s and will I fall? 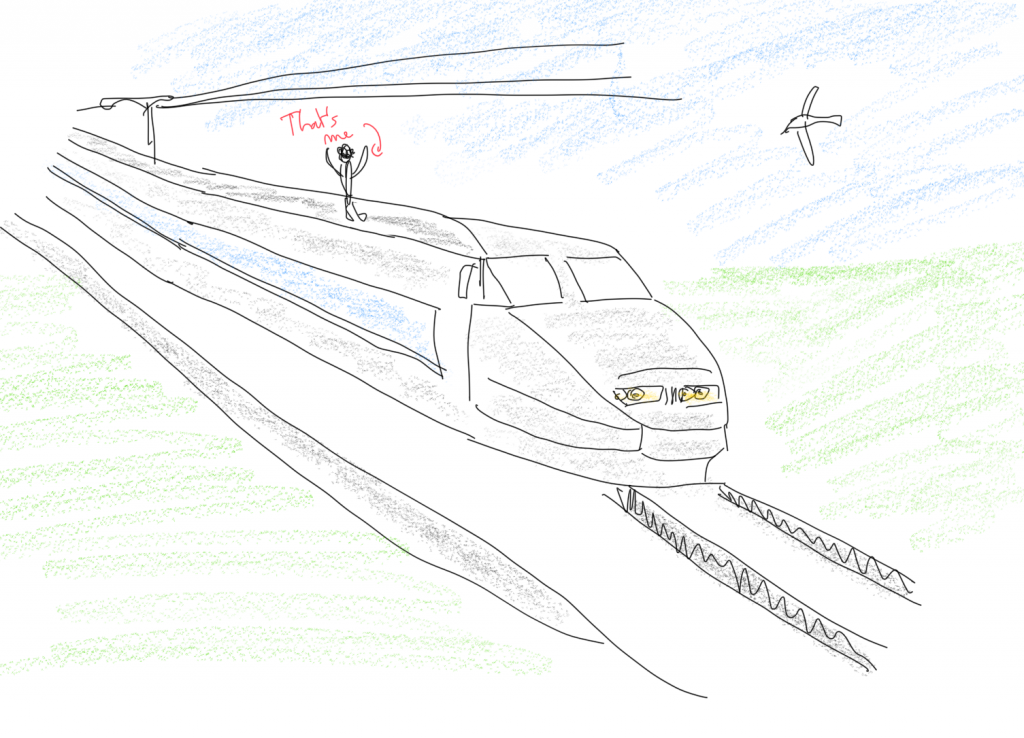 What would happen if I decided to jump??

Would the train just continue to pass under my feet while I am in the air and would I fall? 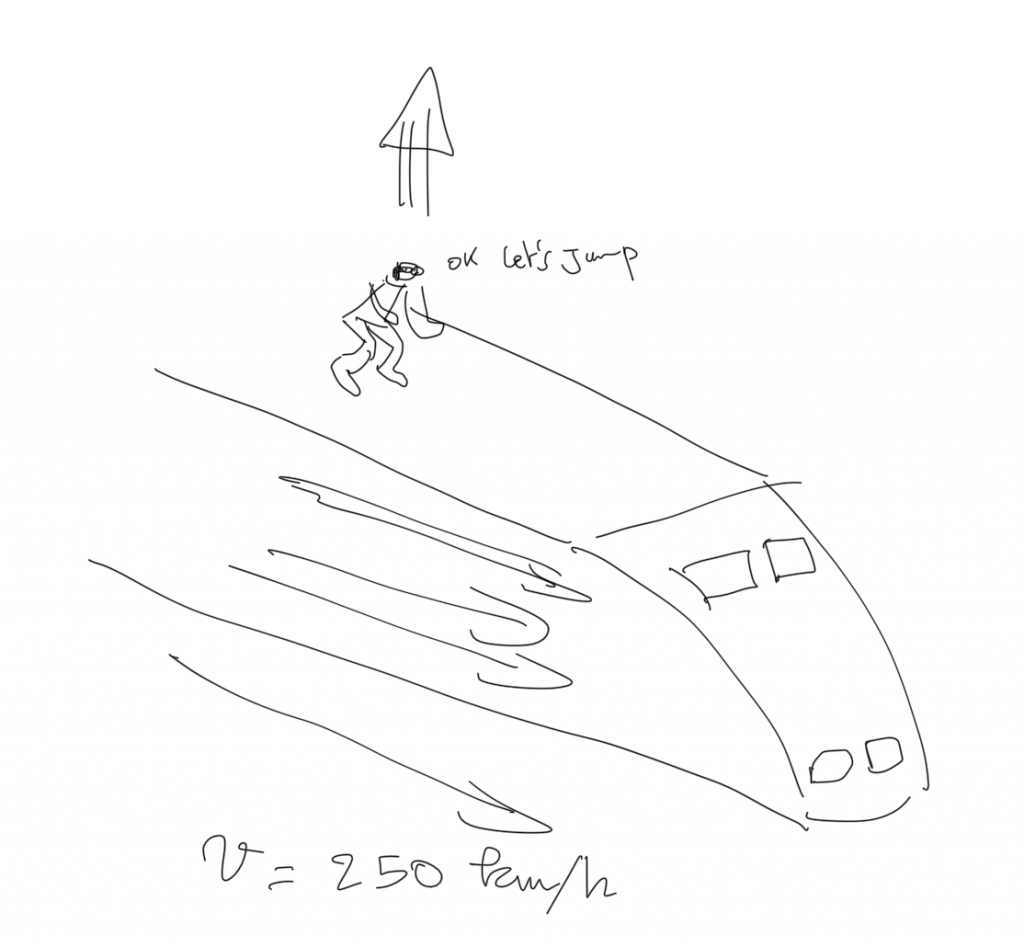 But of course, I am neglecting the wind here… 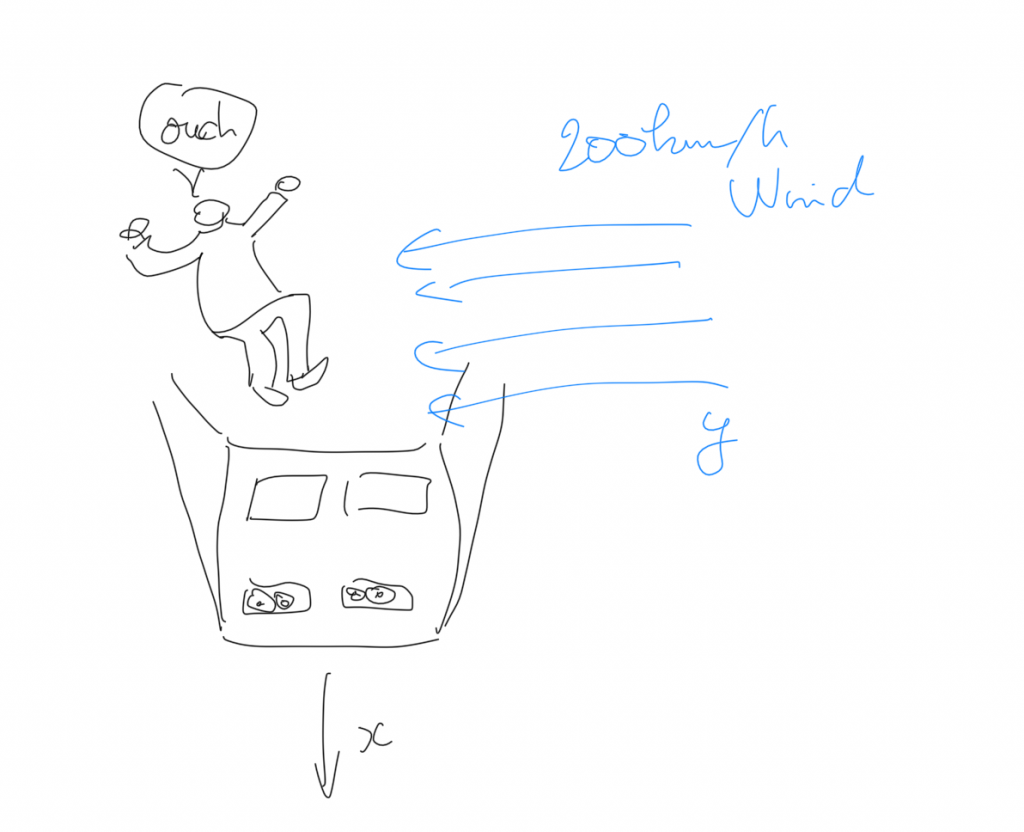 why do I still sometimes feel the move of the train?

When it starts for exemple?

Side Note: I never actually tested my theory by jumping out of the roof of a moving Train… so please dont try what I am describing here, that would be really dangerous ;-)

Ok, back to the problem… How do you explain the “feeling” of acceleration?

What you feel is actually the acceleration of the train 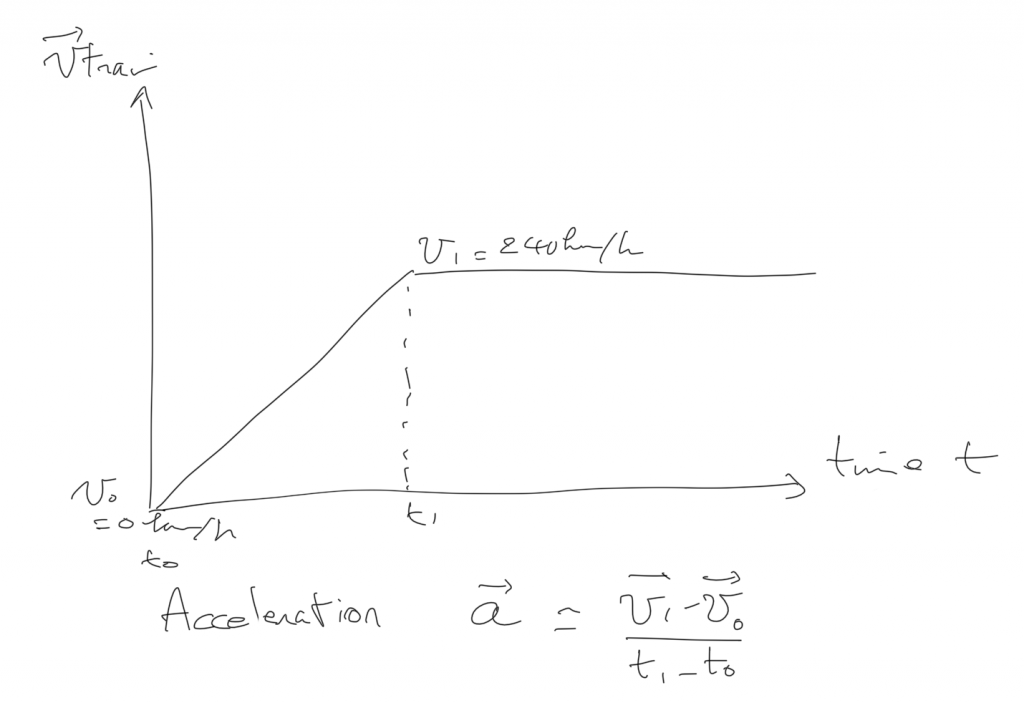 Why do we feel acceleration and not velocity then?

Acceleration is basically a difference of velocity, but combined to the mass, it becomes equivalent to a force

There are 2 things to note here:

When velocity rises, it doesn’t rise at once everywhere it needs time to propagate... that’s why during a very short time, I will feel the acceleration, and then I won’t…

Imagine in The train the grounds moves first, pulling your feet, then as your feet are attached to your body, the wave of speed propagates inside all the body

Is the mass ALWAYS important in FEA?

As you can see here, static means that there is no dependency on time and thus, the sum of all the forces are null…

The mass thus disappear from the equation and is not considered

That’s why in FEA, we only start to care about mass in dynamic conditions... when inertia and mass really plays a role :)

Now that we have this beautiful abstract theory, maybe what you are wondering is:

“When do you actually apply this kind of thing in FEA?”

Well… you know probably if you have been reading the blog for some time that there are many types of FEA analysis.

If you don’t know about that, watch this video to refresh your knowledge:

Why is there different types of fea analysis?

Linear Static analysis is obviously the most easy and straightforward analysis…

But it comes with quite constraining conditions like the fact that boundary conditions have a fixed direction and value and are supposed applied infinitely slowly….

You understand though that reality may be quite different

Actually, I have always wondered what would look like in reality a load applied in an infinitely slowly manner…

When I think about it… the damage inflicted by a punch are all caused by a combination of inertia and speed… interesting ;-)

In reality, some load applied are applied so fast that if you look at their time curve… you get something like that:

Can you consider such a load as applied infinitely slowly…???

That’s when you will need to use more advanced analysis such as:

(Yes, you can mix nonlinearity and dynamic behavior to analysis VERY short time event… this kind of analysis is like the cherry on the top of the cake ;-) )

What have I drunk today to think about all that in the train…?  ;-)

I hope at least some of those thoughts have been useful to you… don’t hesitate to leave a comment and let me know!

A new video tutorial for Salome Meca full of new stuffs is coming your way! Nonlinear Hertz Contact Tutorial I...