I realized that I never wrote any article on this blog about heat transfer and thermal analysis… such a shame not to write about such a fascinating topic!

Here the trip that I propose to you in this article:

I will first tell you what the temperature actually means and where it comes from, then I’ll describe to you the 3 different types of heat transfer that exist in nature and finally, I’ll tell you how to do thermal analysis with FEA.

If that sounds good to you, let’s start the ride!

What does the temperature represent?

The concept of temperature seems so obvious that we generally don’t even ask ourselves where it comes from.

Now I feel that you start to become curious… ;-)

From where is this concept of temperature even coming from?

To answer this question, we have to dive into the realm of the « Angstromscopic » (what? This word doesn’t exist? Yep, I just invented it)

Let’s take a close look at some water. 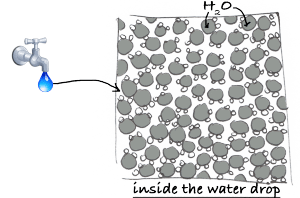 As (nearly) everyone knows, water is composed of molecules H2O

If the molecules of water are well structured under a certain crystal form, they form a solid… in the case of water, those molecules form ice.

Well, it happens that those molecules can be closer to one another… and loose from one another…and they can also vibrate.

Temperature describes the vibration of the molecules.

When the vibration of the molecules is very weak, they become immobilized and stay close to one another.

Temperature is then very low.

When the vibration increases, a certain movement becomes to be allowed and the water becomes liquid. 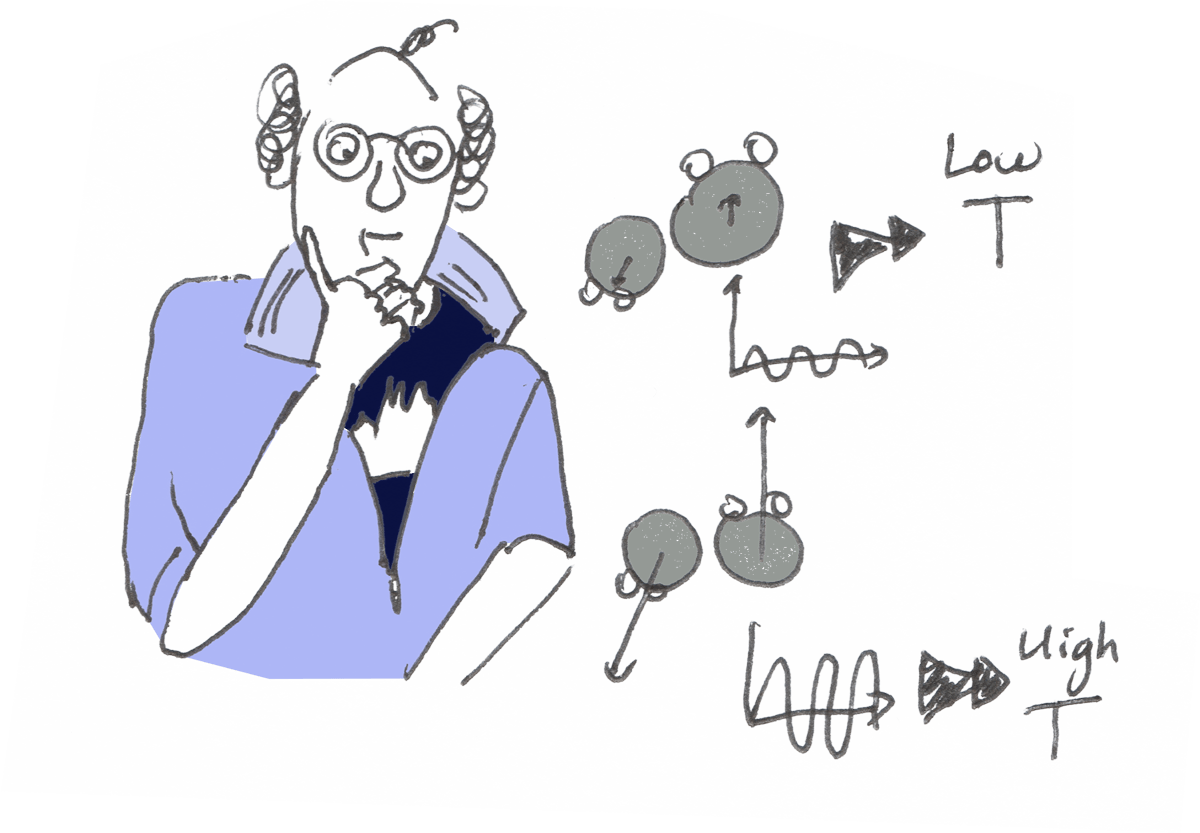 When the vibration increases even more, the molecules detach from one another and water becomes a gas. 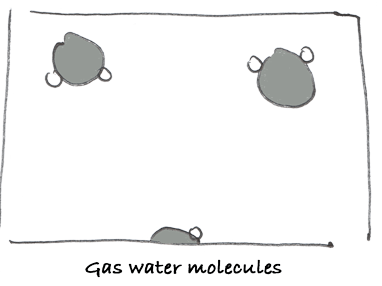 What makes the temperature increase?

Energy, of course! When you give some energy to the molecules, they vibrate more and the temperature increases.

You can think about it like that, when you feed your body with food, you get your cells some energy, that’s why your body starts to generate heat and becomes hotter. When you don’t eat, you become cold.

Now you understand what is temperature!

Temperature is just a name to describe the state of vibration of the molecules.

How does Heat propagate?

When we think about it at a conceptual level, heat transfer is just a name to describe the way molecules are transmitting their state of vibration to other molecules around them.

When « Cold » molecules which are immobile enter in contact with vibrating « Hot » molecules, there is a transfer of energy between them. 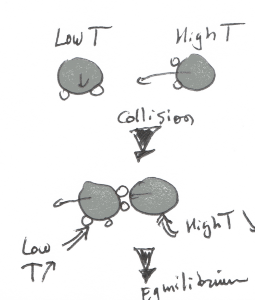 So, if every heat transfer can be described like that, why do we have different ways to transfer heat??

Because there is a difference due to the medium those molecules belongs to!

Some molecules are in a liquid form (like water), while others may be inside a solid or a gas.

Due to this difference of medium and physical form, scientists who have observed the transfer of heat between solids, liquids, and gas have determined certain laws based on their observations.

How do we quantify the transfer of heat?

Now, that we have the definition of temperature, we know how to quantify the vibration of molecules at a certain point.

By the way, the temperature at which there is absolutely no vibration is called the absolute temperature in the Kelvin Scale.

To go from Kelvin to Celsius (or Fahrenheit), we just have to do a simple translation of the temperature scale T(Kelvin) = T (°C) + 273,15K

Temperature is an absolute value.

How do we quantify the speed at which the temperature flows??

Well, for that, we just have to look at 2 theoretical points 1 and 2 at which we take the temperature.

A temperature flow is as the name indicates it, a difference of temperature between 2 points divided by the distance between these 2 points.

If this distance becomes infinitely small, this quotient becomes… a derivative. 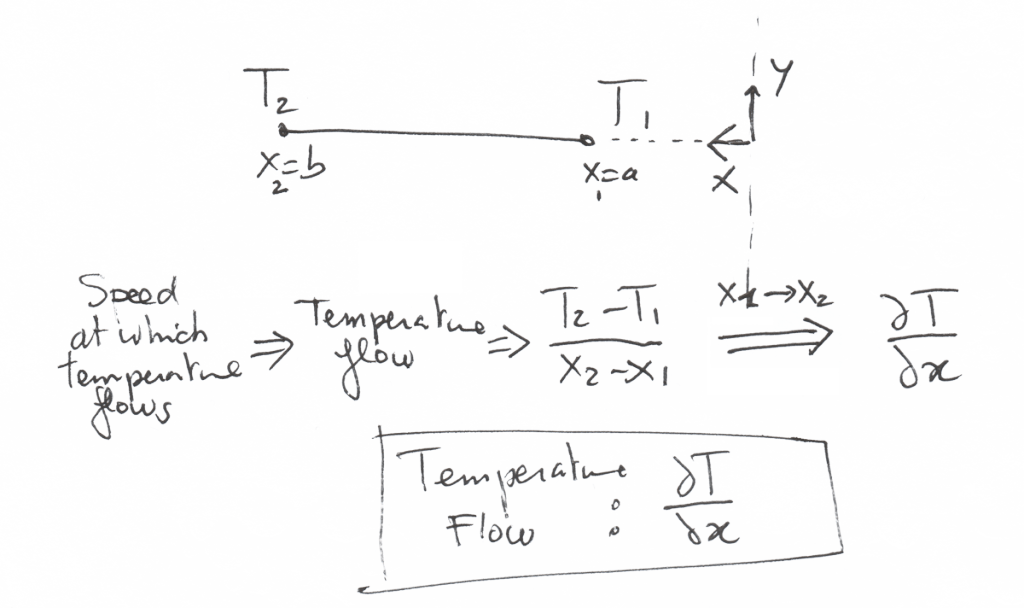 Ok, now that we know that, how do we apply it to engineering to predict the heat flow in various materials and media?

There was a physicist called Fourier, who observed this heat flow in various materials and he was the first to observe something strange….

If you observe the heat transfer between different types of metals, you get a similar mechanism of heat transfer…

The only difference being the speed of heat transfer which is faster in some metals than others.

He then invented a very important and fundamental law in heat transfer called the « Fourier’s Law » (How original ;-) )

Which basically states that the heat flowing through a surface inside a solid material is equal to the heat flow derivative, multiplied by a coefficient K, called the thermal conductivity.

What it means is pretty straightforward… if K is higher, temperature propagates faster and if K is low.

That’s why the metals which have a high value of K lose very quickly heat while isolate material with a very low K value prevents the heat to go through them.

So, to predict the transfer of heat inside a solid, the only thing that you basically need is the coefficient K, which is a constant of the material that you are using.

Heat transfer between a solid and a liquid or gas medium: Convection

To determine how to calculate that, we have to suppose a few things…

We understand easily that if air is not at a uniform temperature, things will become much more complex… so to simplify the whole mechanism, we suppose that the temperature of the air is uniform Ta, and we usually call that the « ambient » temperature. 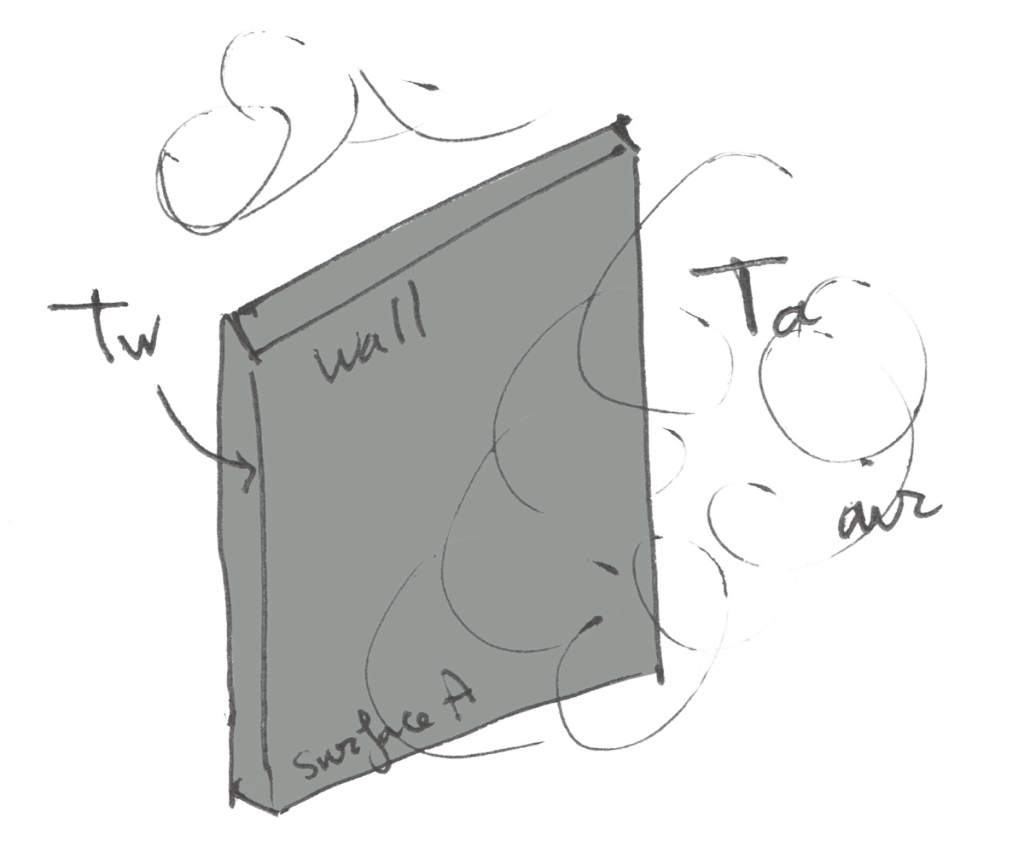 Here again, a brilliant physicist called Newton (Yes, Isaac Newton, the one everybody knows… ;-) ) invented a law called the Newton’s law of cooling:

It basically states that the loss of heat of a body is proportional to the difference of heat between this body and the surrounding medium.

In short, it means that if the wall is hotter than the air, it will lose heat until it reaches the ambient temperature of the air around it, then the difference of heat becomes null and there is no loss of heat anymore.

As it is proportional, he invented another constant coefficient h which depends on the actual medium.

This phenomenon is known as « Natural Convection » and the coefficient h is called the convection coefficient.

You’ll note that this law of convection depends on the surface A of the wall… this is why when you do heat transfer analysis in your FEA Software, you need to specify the surface of the part you apply it to.

What is the difference between natural convection and forced convection?

It is called natural convection when the convection happens normally without the cooling being accelerated by a special device like a fan. It is called forced convection otherwise.

The main difference is in the value of the h coefficient which is much higher in a case of forced convection.

You know that in our physical world, we have 2 types of descriptions of nature, we have « particles » and we have « waves ».

By the way, a lot of discussions between physicists relates to the fundamental difference of physics between particles and waves…

Photons for example sometimes behave like waves and sometimes like particles… but anyway… I am going too far here :-)

(I should take a book about that one day, I am simply fascinated by that…)

So… the energy we receive from a far and distant source, like the sun and propagated by photons of light is transmitted through electromagnetic waves.

(I am a big fan of those equations, so I’ll probably write something about them in the future)

The only thing you need to understand here is that the electric field and magnetic field have the capacity to store and transmit energy.

When the medium around the wave is the void, there is no energy loss, while when the wave enters a medium such as air or water, there is a loss of energy and transmission of that energy under the form of heat.

I won’t give you here too many details because radiation is much more complex than conduction or convection.

The law of Stefan-Boltzmann for radiation

j* is basically the total energy radiated per unit surface area of a black body per unit time.

For more info on that, here’s the Wikipedia article you should visit

Heat transfer which contains a radiation load in FEA is thus a nonlinear type of heat transfer.

How to perform a heat transfer analysis in FEA??

Ok, finally something practical… I told you at the beginning that there would be some demo this time.

I’ll do something very simple here.

I will simulate the heat transfer of temperature inside a simple plate (conduction) as the following: 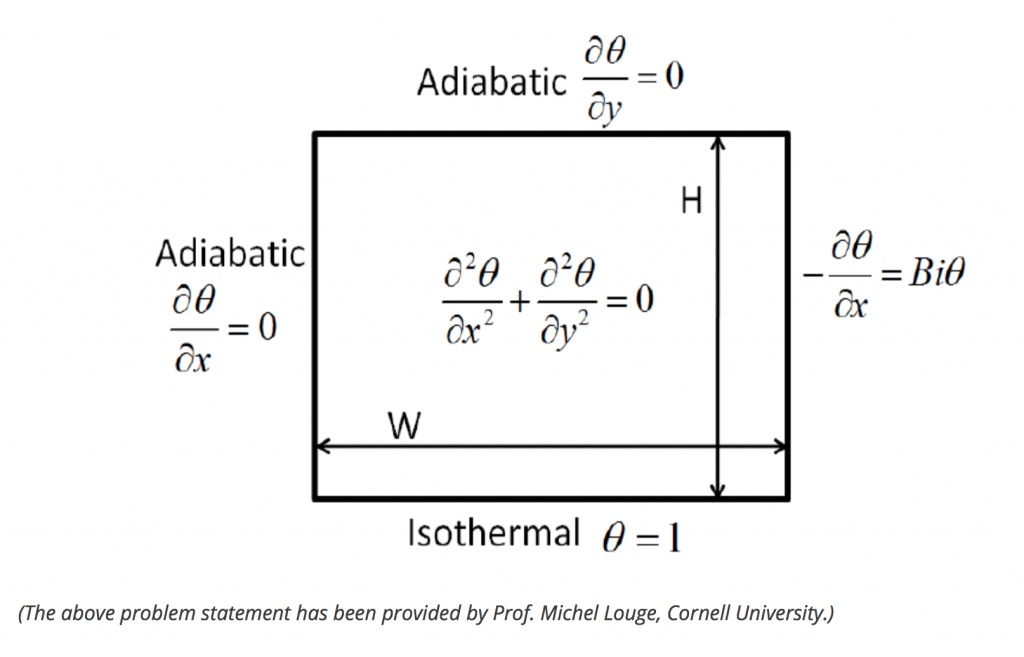 This will be a steady-state heat transfer, we won’t examine the transient state yet.

(If you don’t know the difference, here’s an old article that will refresh your knowledge)

For the first time on this blog, I’ll be using Ansys Academic edition to perform this simple analysis.

The reason being that I just discovered that there was a free version for students available here.

Ok, that’s all for today! 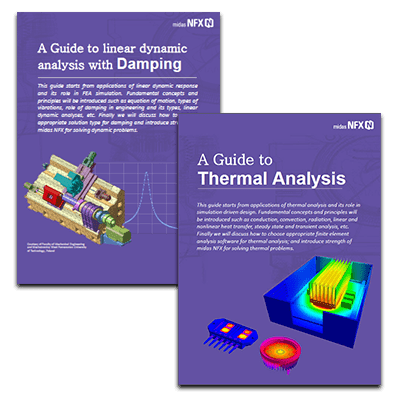 You will learn inside:
- Some principles of conduction, convection and radiation
- How to perform linear and nonlinear heat transfer
- The difference between steady state and transient heat transfer analysis
- An much more... 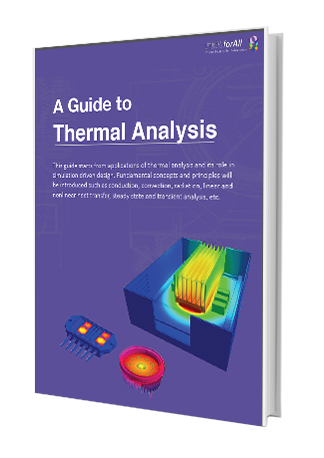 Many engineers I meet don't know there are several failure modes... They think: « That’s pretty simple… you apply a...