If you are a beginner in FE (Finite Element) Analysis, this post should put some light on some of the most essential aspects to understand about “linear static analysis”

Finite Element analysis is a method that helps to simulate mechanical parts and systems to get informations about failure, deformation and stresses under some various kind of loadings.

FEA can help you basically:
– Mechanical designers to create more robust and better products
– Detect the causes of failure in a mechanical system
– Make a system safer by evaluating the risks of failure under various kind of loadings

To apply the FEA method, you need basically 3 things:
– A mechanical problem to solve and eventually a 3D CAD representation of it
– An FEA software that will help you to model and solve the problem
– Your engineering skills and experience to assess the results and improve the model

If you don’t understand the difference between CAD and CAE (FEA included), here’s an article you might like:

Article: The difference between CAD and CAE 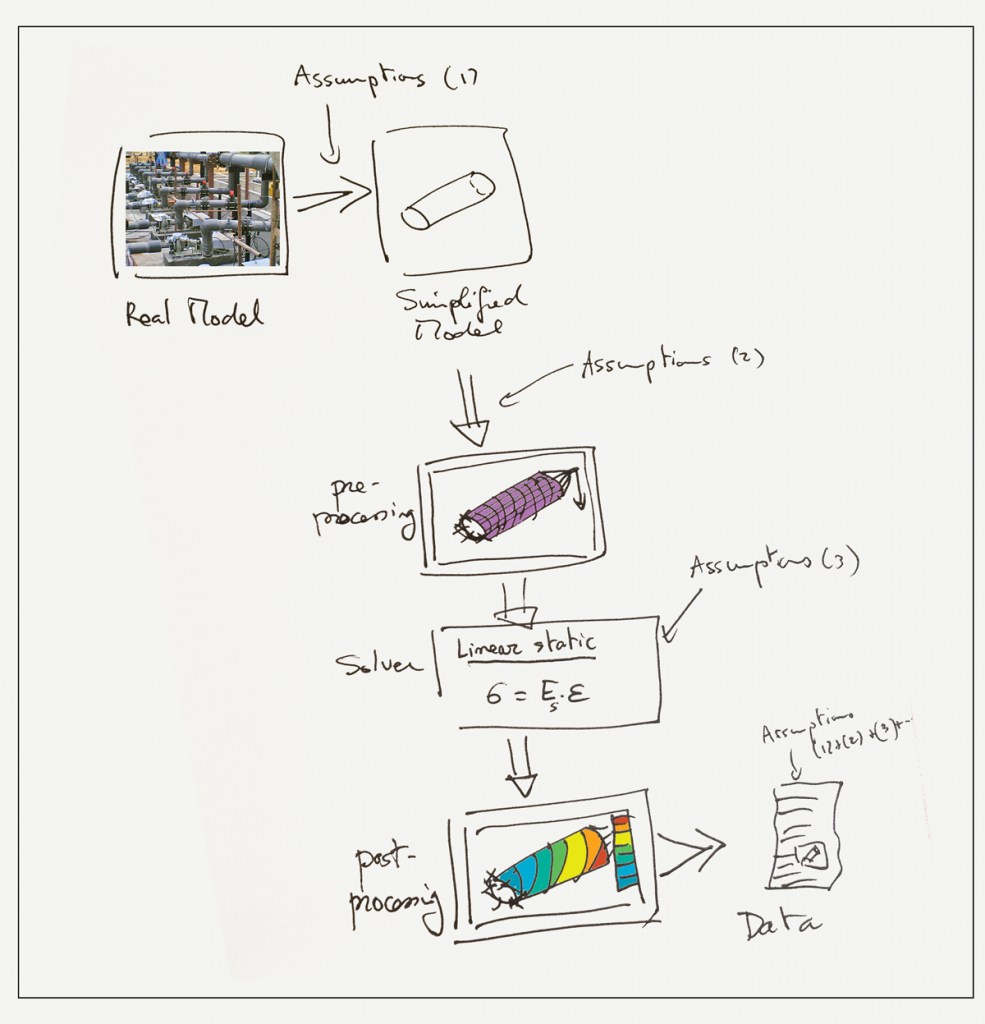 FEA simulation is also very dependent on the skills of the engineer that is using it, because assumptions have to be made all along the way from modelling to the solution and results.

Want to understand the FEA System more in details and how it works? Click here

In this article, I will be talking about one of the most capital steps required when you actually define the problem you are gonna solve:

Choosing to solve your model with linear static analysis…or deciding it is not appropriate and that you have to look further.

1- Why is linear static analysis so important?

To answer this question, I think that we have to come back to the beginning of FEA in the mid-sixties

FEA was developed by the NASA at the beginning to verify the design of costly aerospace mechanical systems (rockets, satellites, shuttle,…), because you see, when you have such a product to design, you don’t want to waste money making too many costly prototypes… you have to increase the chances of success the maximum you can before actually trying in the real world (we all know how costly were the accidents that happened in aerospace due to bad engineering…).

When computer appeared to be able to do such calculations instead of us, scientists immediately seized the occasion to use it to calculate the possibilities of failure.

The only problem is that when the finite element method was first invented, the resources required to solve nonlinear very complex problems where much more limited than now.

People decided to make assumptions and decrease the level of complexity of the equations to solve to make it manageable.

Moreover, if you can simplify something and that the error can be controlled, I think also that this is the right way to go. 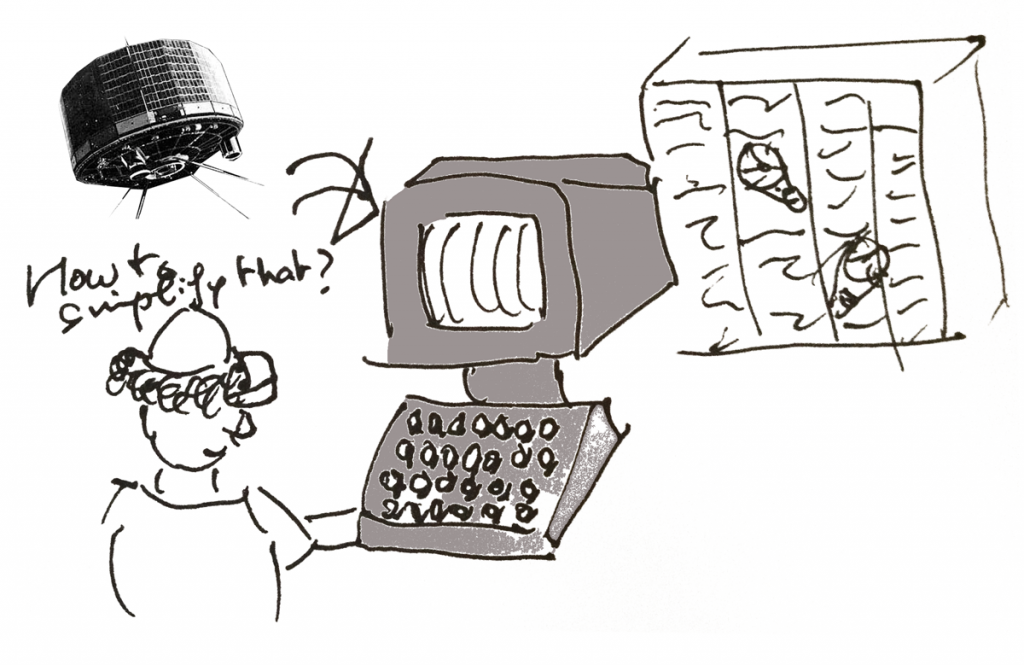 2- What is linear static analysis?

Here we comes to the main topic of this article… what is linear static analysis?

I think that the answer is pretty straightforward.

And when I am going to tell it to you, you will probably remember that for life.

Linear static analysis is simply an analysis that has 2 main assumptions:

– This analysis is linear, which means several important things that I will discuss right after.

– This analysis is static, which means that it doesn’t depend on time.

Linearity means a lot of things and comes from the basic hypothesis that are done at the beginning:

– We stay always in small deformations

– The loads and constraints don’t change value or direction

– The material is considered elastic

By the way, if you are interested, I have a free course that will give you more details:

3- How does the solver uses linear static analysis to solve your FEA problem?

Warning: that’s a very simplified explanation so you understand the concept behind all that… it doesn’t replace a real course about the finite element method…

The algorithm the solver uses to solve linear static analysis is very simple.

What it basically has to do is to solve a system of linear equations coming from the simplification of the Hooke’s law.

You provide the loading data, the constraints, the geometry and the material data. Using this info, the solver computes the stiffness matrix and generate the boundary condition scheme that will help him to solve the system.

The unknown is the strain, which gives the displacements in your model, once integrated. 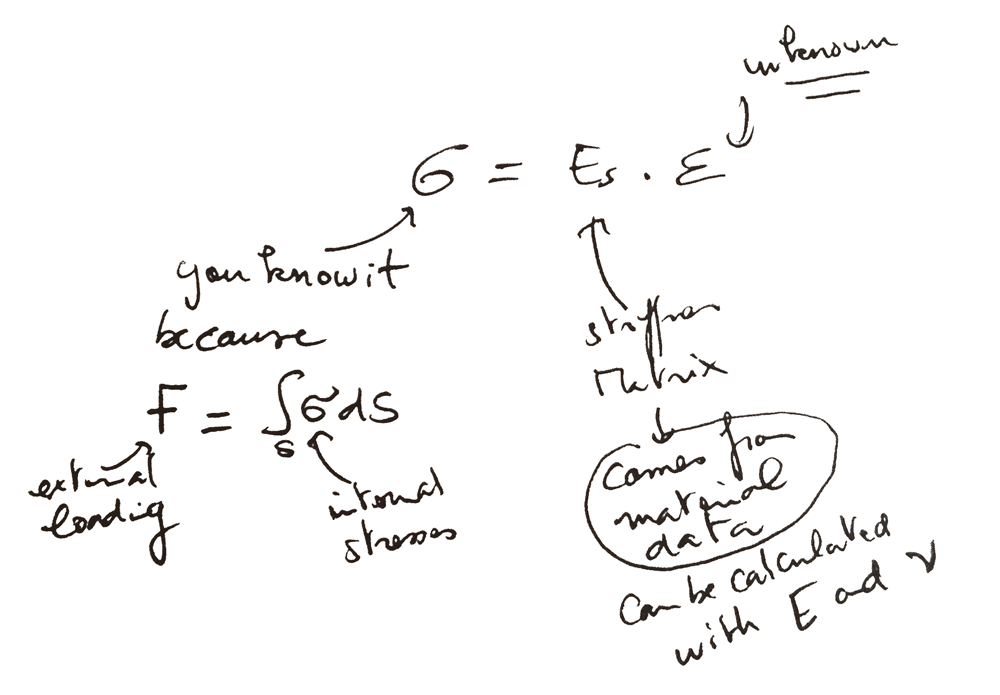 As the system is linear, what the algorithm basically does is:

1- An inversion of the stiffness matrix using a numerical method such as the LU decomposition, the Gauss-Seidel method or the Jacobi iteration.

3- An integration to get displacements

4- An interpolation to get stresses in your model

4- An example of Linear static analysis

That’s actually a fairly old video tutorial I did some years ago, but I think it is still interesting for FEA beginners to understand a simple linear static analysis workflow:

Ok, that’s all for today

In this video, I'll show you how to do a simple steady state thermal analysis of a plate with the...