In this tutorial, I’ll introduce you to the most basic things you should know about FORTRAN:
– How to write a quick Hello World Script
– How to compile it
– How to launch it ;-)

All the tutorials will be on Ubuntu 16.04 that you can download and install freely on a second partition or a virtual machine if you like:
https://www.ubuntu.com/download

You don’t need to have Ubuntu though to compile fortran of course!
There are some solutions for windows and mac

Just search “compile FORTRAN on windows” and you will find quite a few ;-)

So why would you like to study Fortran actually?

I’ll have also some videos about Python too on the blog soon… ;-)

OK…still want to learn Fortran?… you must have some good reasons then ;-)

For me, it was mainly because I was looking into the source code of Code_Aster, and I realised that so much of it is written in FORTRAN…. and I just don’t get it, haha

… but after spending some time on understanding the logic, you will find it is not as complex as you may think!

So if like me, you want to understand the algorithms behind the source code of some dinosaur(but still extremely powerful ;-) ) software

…if you want to be able to to add your own functions to compile the source code and all the these things, then you will need to have a basic knowledge of FORTRAN

That’s what this series of videos is about and that’s what I’ll teach here!

okay so without any more talking let’s start right now

2- Creating the folder and file of your program

The new Folder now appears on my desktop
(By the way I'm on Linux Ubuntu 16.04 but you can also use and do Fortran on other systems... for the compilation it will be a
bit different... just search "how to compile fortran" on google and you'll find a lot of stuff)

So I have my Fortran file now...

Let's get  into it and let's open a new text file. Let's call
it "helloworld" and give it an extension F95.

so I'm using here the convention of Fortran 95 there are different kind of
fortran files (fortran 77, fortran 90
Fortran 95, etc...)

The oldest is (I think) FORTRAN 77 which is very old kind of format which still use fixed format source code and has a lot of annoying stuff inside so if you really want to do that well your you
can do it but the the best is to start with fortran 95...

emacs helloworld.f95 (this commands uses the text editor program emacs, but you can use any other you have installed... like "nano" or "vim" for example...)

(just try Esc-X tetris and you'll understand why I say emacs is fun, haha... so many pearl hidden inside it)

I just want to create a basic function which will print "hello world"
to the screen so here  what we have to write:

In Fortran, you put a small star after the print which will be replaced after by the string that you want to print "Hello World", provided after the comma.

Now... how do i execute and actually get "Hello World!" printed? 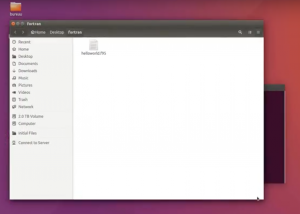 So that's that's how it works:

Now, open a new terminal window and I will use gfortran program to compile my fortran file with the following command:

cd Fortran (if you are not inside the folder already)

gfortran helloworld.f95 -o helloworld (this is the command to compile)

(I think generally in Linux distribution, you always have gfortran installed by default...)

After inputting this command, you will see that the executable "helloworld" has been generated

To launch and execute it, just enter this command in your terminal:

I have to execute it from the terminal common because now it's a program without any graphical interface so the command prompt displays what you want to see.

This is what you should see now:

now if you're not on Linux Ubuntu your windows
or something you'll have to find a way to compile a Fortran program ​with a specific windows compiler...

That's all for this tutorial!

In the next video we'll see a bit more about how to add things into the file like variables, how to declare them, how to read a variable from terminal, etc... 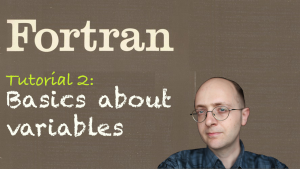 The color map... For those who already know me and read my articles since a long time, you know probably...