when I didn’t know what it was, I use to think that it was not so important…but then I had this model which was perfect in appearance but the analysis didn’t want to run and I kept having this message telling me my model was not properly constrained.
I check everything, several times but i still couldn’t come to a conclusion as all the boundary condition seemed to be set correctly…

This is when I learnt about mesh topology…

What happened is that I had merged 2 mesh set which were not connected properly through the nodes and now it appeared as 1 unique mesh set (same color) so I thought it was ok when actually it was not…
I had unconnected nodes which were exactly at the same position (so I couldn’t see the problem with my eyes) but this was the reason why I had this degree of freedom issue.
Then what I did is that I used the “check mesh topology” feature and it showed me right away the face where I had this unconnected nodes.
This is only one reason to check the mesh topology, there are many others.

Checking the mesh topology for example will allow you to detect:

Here is an Interactive Tutorial

Rather than explaining that in this email, I decided to show you on some simple example how to check the mesh topology of your model.

This demonstration is interactive so I hope it will help you to understand how to use those functions in your own model.

Try to check the mesh topology now in your browser 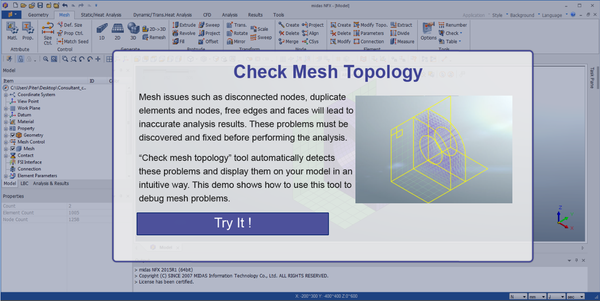 FEA Software is your golden goose

Do you know this Aesop's Fable about the golden goose? This fable is the story of a poor farmer who...