Stress Color Painting... and why you should never do what I did in that first FEA project...

When I entered for the first time a company doing real FEA calculations, I thought it would be easy...

I knew the software I had used when I was in engineering school and I knew the process:
1 - First import the CAD
2 - Constrain and load it
3 - Then finally click on the solve "Button"

It started well... or so I thought.

The only temporary problem was that the model was really huge and getting the software to mesh it was a challenge in itself.

...but nothing truly impossible.

After just few hours of work, I got the model solved.

Got beautiful displacement & Stress contours and even printed them to display my early success.

I thought FEA was all about getting those colors and I knew nothing else.

That's what everyone was talking about...

So, prepared for victory, I went to my boss and showed to him those colors I got. 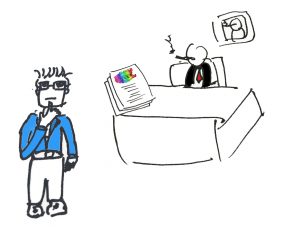 HINT: His response was far less enthusiast than mine.

He just told me to go back at my desk and look again at those results.

I didn't understand... did I do something wrong?

Obviously I did...but what? I couldn't get it.

Then the second day after thinking about it for a loooong time, I went again to ask my boss what was the problem with my model...

The reason I told you to look back at your result was to make you think about the hypotheses you took and the assumptions you made.

FEA is just a numerical method in itself. It feeds from the input data you give to the software and it just calculates a response.

If the input data is wrong, the output is then ALWAYS wrong.

FEA simulation engineers call this principle the "Garbage in- Garbage out" Principle.

If you don't reflect seriously about the input of your model and why you modeled it in this way from the start, you can't even pretend to be an FEA simulation engineer.

I said I understood.

That day had been crushing for the young engineer I was... but it gave me also an important lesson.

FEA isn't about how well you know how to use a software to get some colors... It's an engineering method to calculate real world results.

And to get real-world results, you need to think about your model actually represents the reality around you...

But that's not enough...

You must be able to PROVE it too.

...If aren't still totally clear with what I just explained, don't worry, because there is an easy and straightforward way to understand how FEA works.

That's what I call the "FEA system".

Continue to read and I'll explain to you what it really means...